A new viewpoint on the Tarantula Nebula, also known as 30 Doradus, is provided by NASA’s James Webb Space Telescope. This region is well-known to astronomers who study star formation. Its likeness to the spider gave rise to its nickname. Nevertheless, in Webb’s opinion, the entire area resembles a tarantula’s home—a burrow coated with its own spun silk. Thousands of young, still-forming stars can be seen in the Tarantula Nebula, many of which were discovered by Webb for the first time.

Together, a variety of Webb’s high-resolution infrared instruments display the nebula’s stars, structure, and composition in unprecedented detail. Webb will be used by astronomers for the duration of its mission to learn more about star formation and the stellar lifetime. This has consequences for the production of the heavy chemical components necessary for life as we know it as well as for our own star, the Sun. 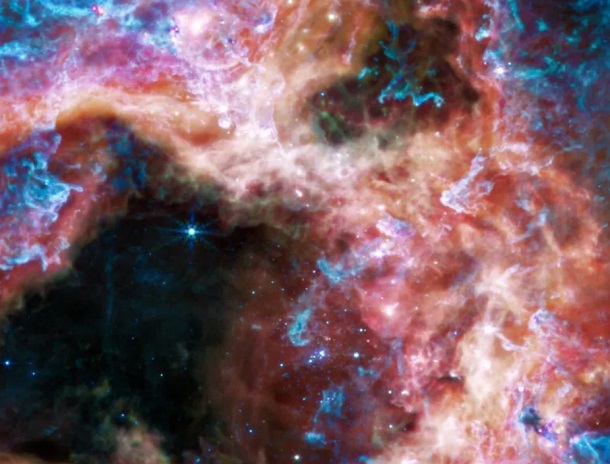 The Tarantula Nebula is seen significantly differently when Webb concentrates on the region surrounding the main star cluster in the longer wavelengths of light collected by its Mid-Infrared Instrument (MIRI). As the young, blazing stars of the cluster lose their brightness in this light, luminous gas and dust advance. The dust clouds, seen in blue and purple, have surfaces that are illuminated by a lot of hydrocarbons. Because mid-infrared light may reveal more of what is going deeper inside the clouds, a large portion of the nebula seems more ghostly and diffuse. Still-embedded protostars pop into view within their dusty cocoons, including a bright group at the very top edge of the image, left of center.
Darkness can be seen in other places, such as the image’s lower-right corner. This denotes the parts of the nebula’s dust that are the densest and which even mid-infrared wavelengths cannot penetrate. These might be the locations of present or future star formation.

A consortium of publicly financed European Institutes (The MIRI European Consortium), in collaboration with JPL and the University of Arizona, planned and built MIRI with funding from ESA and NASA.