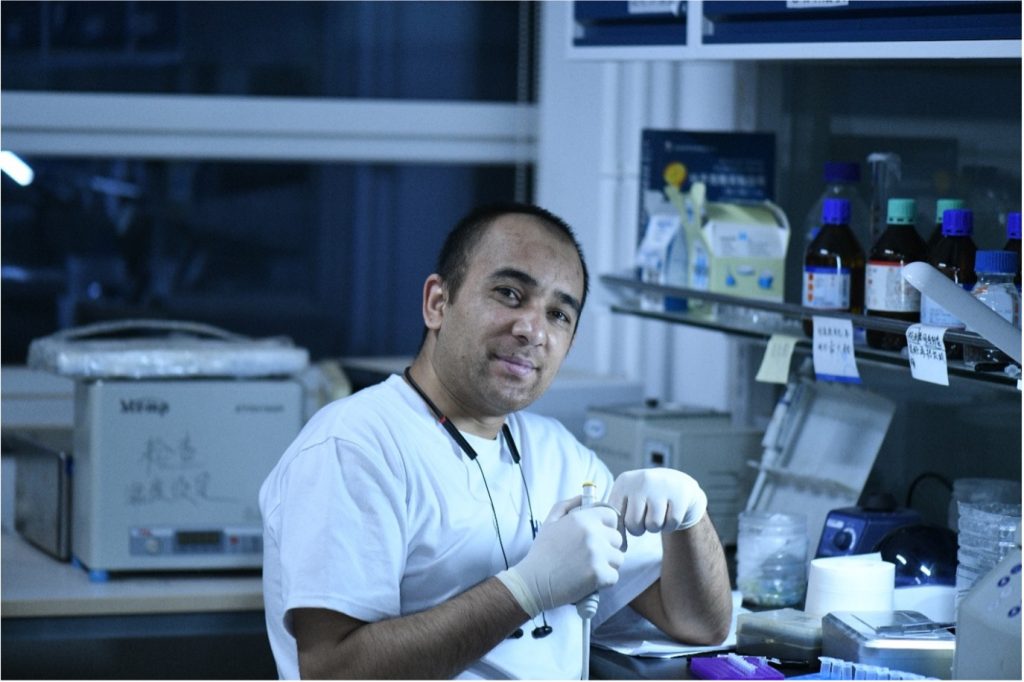 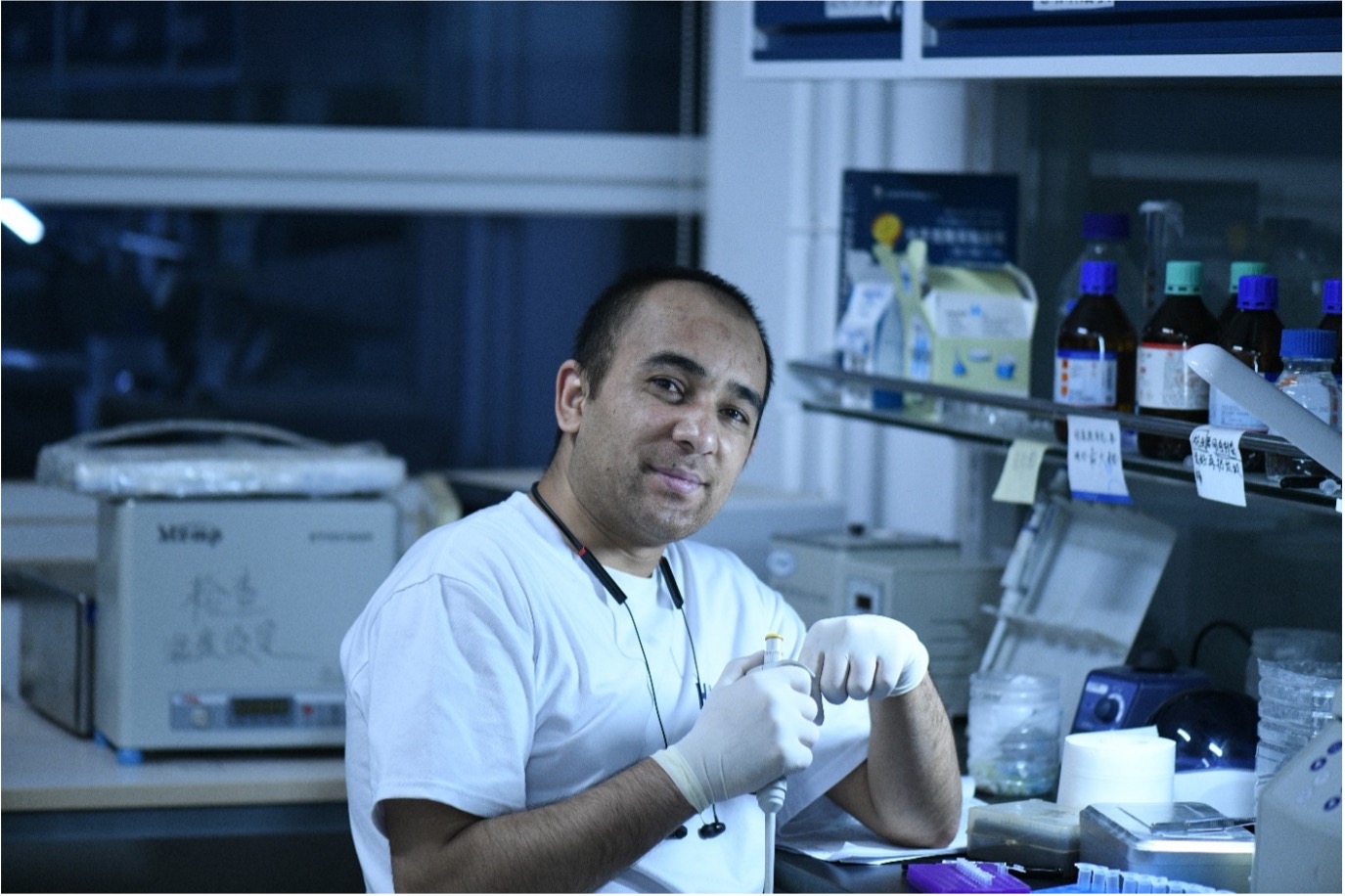 Dr. Muhammad Asghar Hassan is Ph.D. Scholar in Department of Entomology, at China Agriculture University Beijing, China.
I completed my primary to secondary education in Skardu, Gilgit-Baltistan, and earned bachelor’s and master’s degrees in Agriculture with a major in Entomology from the University of Poonch Rawalakot, Azad Kashmir (2012-2016) and Arid Agriculture University Rawalpindi, Pakistan (2016-2018), respectively. During my bachelor’s degree, I got the opportunity of an internship to learn the basic taxonomic skills at the National Insect Museum (NIM), National Agricultural Research Centre, Islamabad. I enjoyed my time at NIM, and the pleasure I experienced from studying and working in the field of taxonomy inspired me to pursue a career as a taxonomist. I then followed the taxonomic work on different families of true flies and some minor insect orders from Azad Kashmir, Gilgit-Baltistan, and the Pothwar region of Punjab, Pakistan. I consider myself a curious and aspirant person who is interested in the systematics of the northern fauna of Pakistan, particularly the distribution of insects in the high mountains of Gilgit-Baltistan. For this reason, I have always been fascinated and interested in the fauna of high mountains in Azad Kashmir, Khyber Pakhtunkhwa, Gilgit-Baltistan, and Murree Hills in Pakistan. Because of this, I chose these regions as the major collection area for my Ph.D. research to address the following questions: 1) How many insect species have been previously identified in these areas? 2) To present an annotated catalogue of known and newly recorded species; 3) Find out the rarely known or endemic species which need attention for conservation; 4) To digitalize the fauna of Northern Pakistan; 5) Establish the DNA Barcode Library for the northern fauna of Pakistan. Following a brief educational background, I would like to give a short introduction to my hometown, Gilgit-Baltistan, from whence I aim to continue my taxonomic research once I return to Pakistan following graduation this year. Lastly, I have also briefly explained my key research interests and future research objectives for those interested in the insect fauna of Northern Pakistan. Introduction to Gilgit-Baltistan Gilgit-Baltistan, historically known as the Northern Areas, is the northernmost territory under the administration of Pakistan. GB shares its borders with Azad Kashmir to the south, Khyber Pakhtunkhwa to the west, the Wakhan Corridor of Afghanistan to the north, the Xinjiang Uygur Autonomous Region of China to the east and northeast, and Jammu and Kashmir and Ladakh to the southeast. 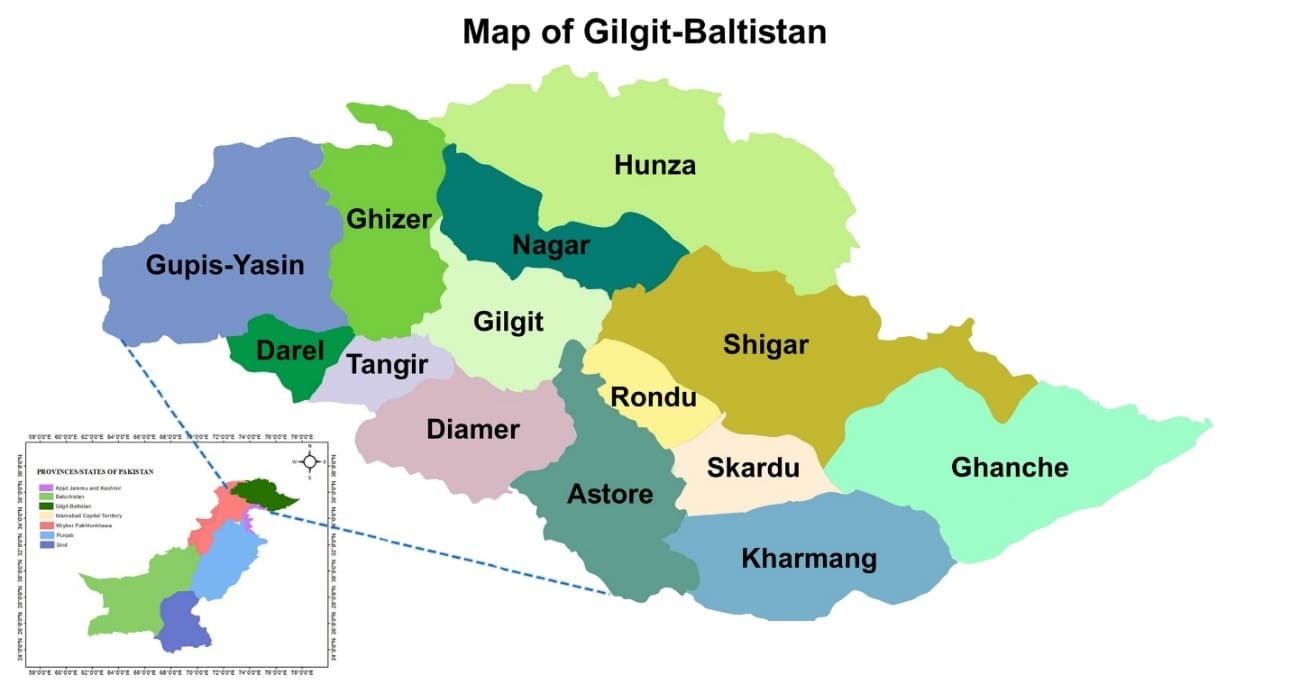 Administrative units of Gilgit-Baltistan The secret of Gilgit-Baltistan occupies an extraordinarily varied and attractive landscape, home to the meeting point of the world’s three great mountainous regions – Himalayas, Karakorum, and Hindukush, as well as the world’s two major biogeographic realms – Oriental and Palaearctic. For many travelers and naturalists, GB is a popular tourist destination in Pakistan because of its natural beauty, rich cultural heritage, and home to the world’s second-largest mountains – K2, as well as the Siachen Glacier (one of the world’s longest mountain glaciers), the Karakoram Highway (the world’s eighth wonder), and Deosai National Park (the world’s second-highest plateaus). GB is home to rare wild animals such as Himalayan Musk Deer, Marco Polo Sheep, Markhor, Himalayan Brown Bear, Ibex, Snow-Leopard, and Yaak, as well as a wide range of insects in varied habitats and extremes in topography, which harbour a particularly rich diversity of flora and fauna in a unique ecosystem. 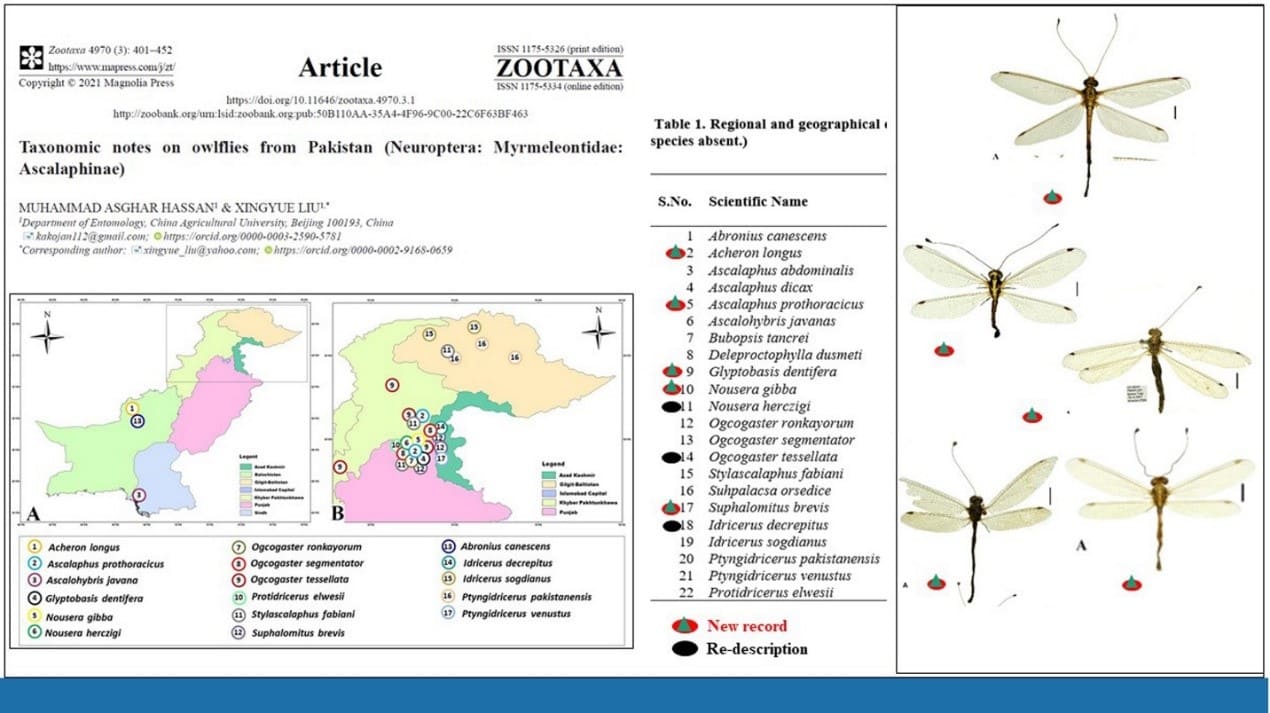 The diversity of owlflies (Neuroptera: Myrmeleontidae: Ascalaphinae) in Northern Pakistan Why is GB a heaven for rich flora and fauna?  What are the research opportunities for the future? There are a lot of opportunities in finding many new and interesting species in Pakistan, particularly along the western Himalayan edge with its unique valleys, mountains, water bodies, variable topography, the transaction zone between the Oriental and Palaearctic regions, high altitude alpine plains, and cold deserts, where habitats are suitable for diverse flora and fauna in the northern areas. With its diverse topography and unique valleys, GB welcomes new opportunities for young and emerging regional and national scientists to explore the undiscovered beauty of nature and create awareness about local biodiversity conservation, particularly for rare or endangered species in northern areas 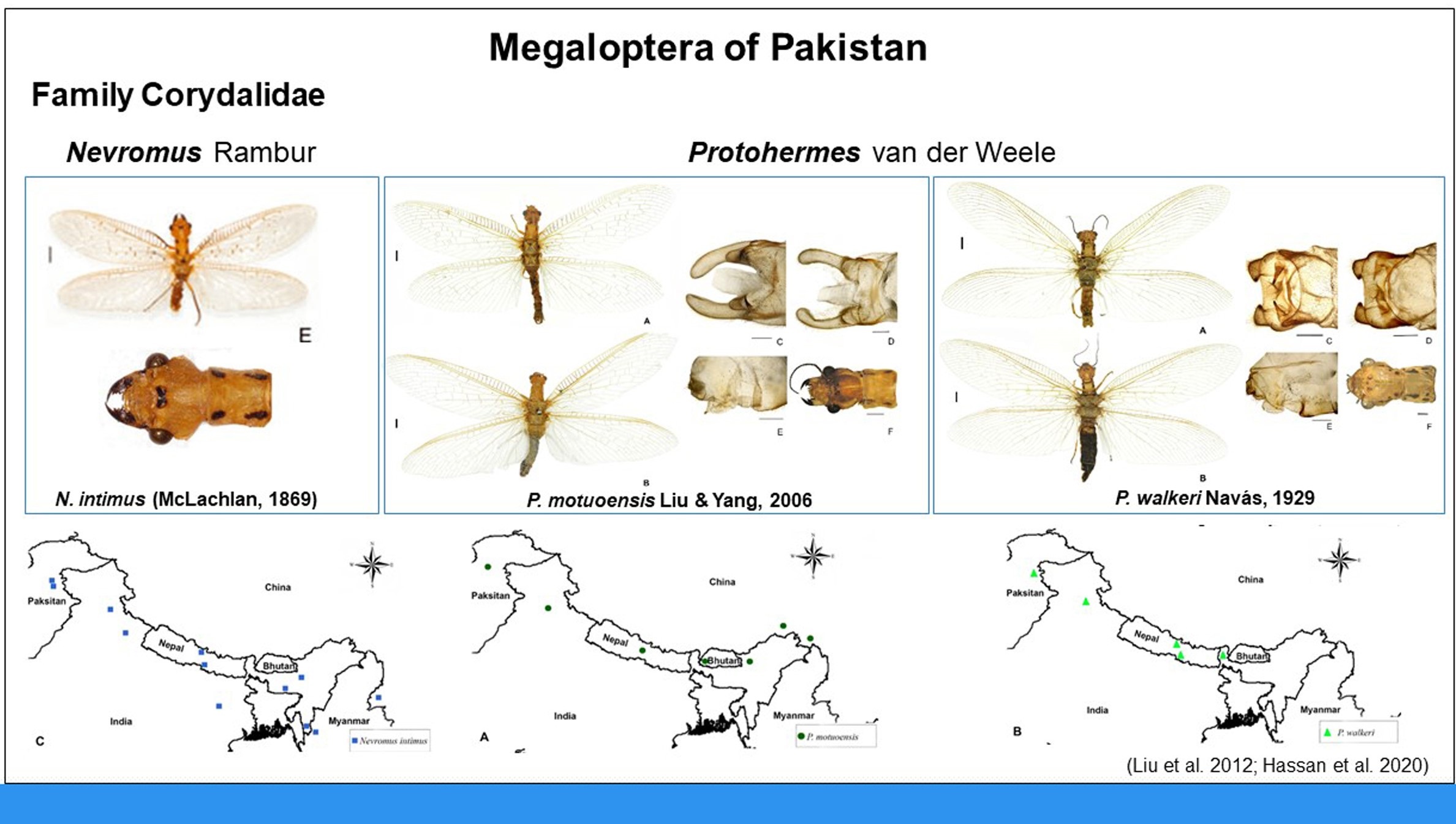 Recent finding of some rarely encountered dobsonfly species from Northern Pakistan GB is fortunate to have two key universities: the Karakorum International University (KIU) in Gilgit and the University of Baltistan (UOB) in Skardu that have been exploring the regional flora and fauna, however, there is currently no regional museum for the preservation of local flora and fauna. During my visit to Beijing Inspection and Quarantine in 2019, I understood the significance of a regional museum collection that includes native and invasive species to the region. In my opinion, we should decide to establish a regional museum in order to improve the regional records for conservation, promote local awareness, and educate our youngsters about how to prevent future invasive pest species threats. We have the worst mealybug example, and possibly the fruit fly in the near future, and I am not sure what will be the next one? It’s time to feel the pain, come up with a plan, and put it into action for the conservation and preservation of local flora and fauna before it’s too late. We should believe in persistent hard work and determination with patience as a team to achieve our aims for the protection of local flora and fauna through regional and national collaboration with joined hands. There are ample opportunities for conservation, exploration, and preservation of local flora and fauna in various fields; but I have chosen to devote my life to exploring and conserving the Insect Fauna of Northern Pakistan. I wish for the young researcher to contribute to GB by unearthing the north’s hidden beauty. 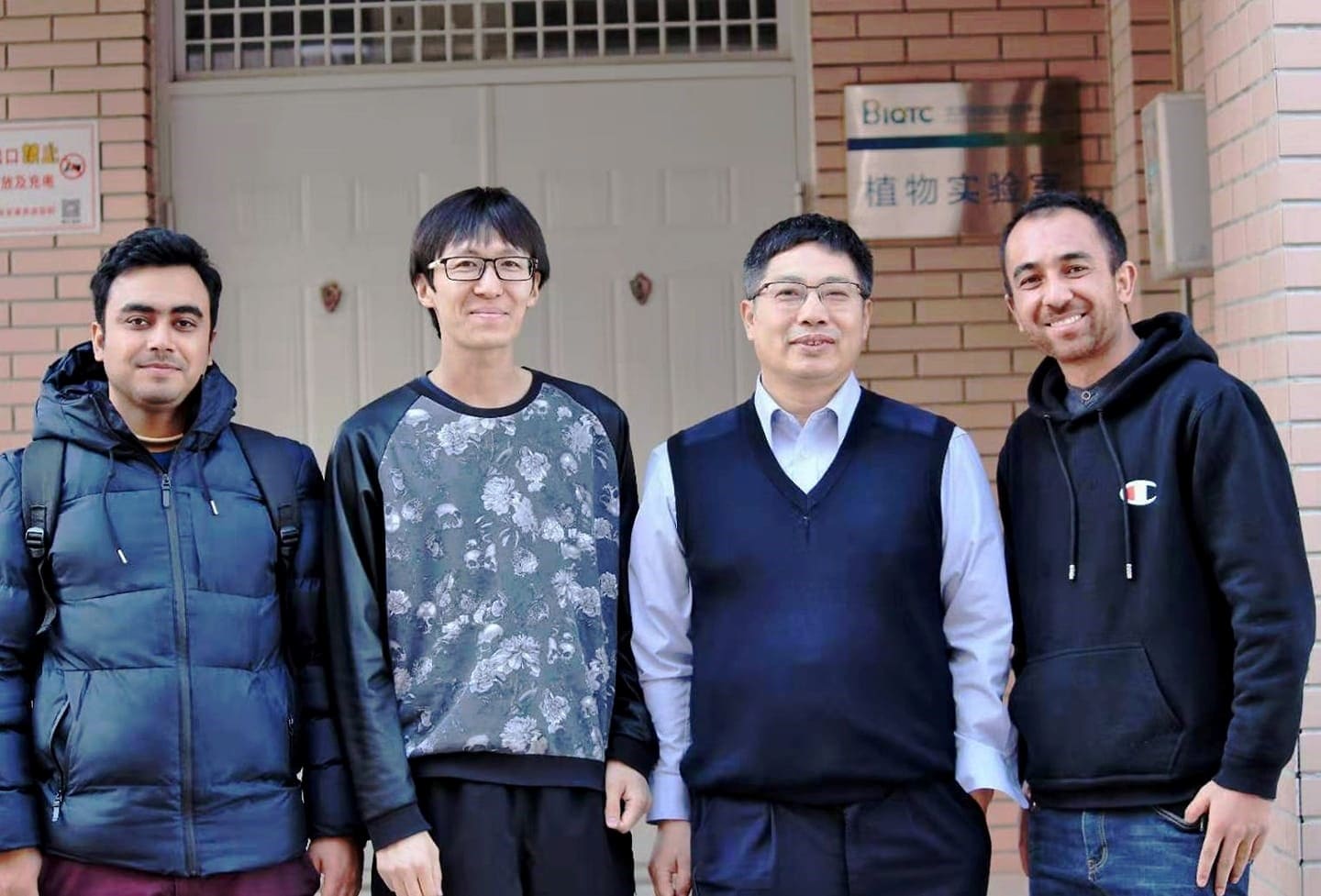 An official visit to Inspection and Quarantine Centre in Beijing (2019)

I am looking for insects in the highlands since 2015 to explore how altitude affects insect diversity and how it interacts with landscape complexity and plant community in the areas Altitude is the main variable affecting the distribution and diversity of insects. Since 2015 I am looking for a particular group of insect diversity along an altitudinal gradient in Gilgit-Baltistan and Azad Kashmir. To answer how climate change affects the diversity of insect community in the high alpine and subalpine region in northern Pakistan and its interaction with landscape complexity and plant diversity, I am currently working on the systematics of several rarely known insect orders, such as Megaloptera, Neuroptera, Raphidioptera, as well as the economically important but understudied groups, such as northern true flies (Diptera) from high mountainous regions in the northern territories, where the world’s two major biogeographical realms intersect, providing a home to mix faunal diversity of the Oriental and Palaearctic regions. 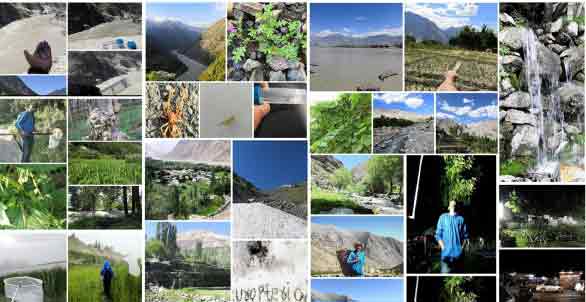 Life window of Insect sampler in GB I am passionate about  jewels (insects) in GB since 2015 During the expedition in the last six years, I found many new and interesting species of Oriental and Palaearctic origin: a number of rarely known Oriental and a few Palaearctic species of the hover flies (Diptera: Syrphidae), black scavenger flies (Diptera: Sepsidae), soldier flies (Diptera: Stratiomyidae), blow flies (Diptera: Calliphoridae), antlions and owlflies (Neuroptera: Myrmeleontidae), and dobsonflies (Myrmeleontidae: Corydalidae), however, only a few species have been published but many unidentified species are still waiting for formal description. Luckily, I am familiar with the northern mountains and valleys in Gilgit-Baltistan, where I live, Azad Kashmir, where I completed my bachelor’s degree, and Punjab, where I completed my master’s degree on the taxonomy of several families in Diptera order (Calliphoridae, Conopidae, Sepsidae, Stratiomyidae, Syrphidae) from 2015-till now, and Khyber Pakhtunkhwa and the aforementioned areas, where I collected the lacewings (Neuroptera) and dobsonflies (Megaloptera) in Ph.D. during 2018-2022.  Future Direction My main interest is to develop an “Updated Catalogue of the Insect Fauna of Northern Pakistan”, but of course, this has been initiated in 2015 and we added many new and interesting country records for Pakistan in a series of publications (see the detailed references: https://www.researchgate.net/profile/Muhammad-Hassan-89) in recent decades and will lead to further extension of our knowledge of rarely known species in the country. Northern regions are noted for their rich biodiversity and varied type of habitats, which attracts a wide range of unique species of insects. Finally, I will warmly welcome young and enthusiastic taxonomists from Pakistan to work collaboratively on the following inset groups with which I am familiar: Diptera (Calliphoridae, Conopidae, Sepsidae, Stratiomyidae, Syrphidae), Neuropterida (Raphidioptera, Neuroptera, Megaloptera), and Hymenoptera (Apidae, Formicidae, Vespidae). 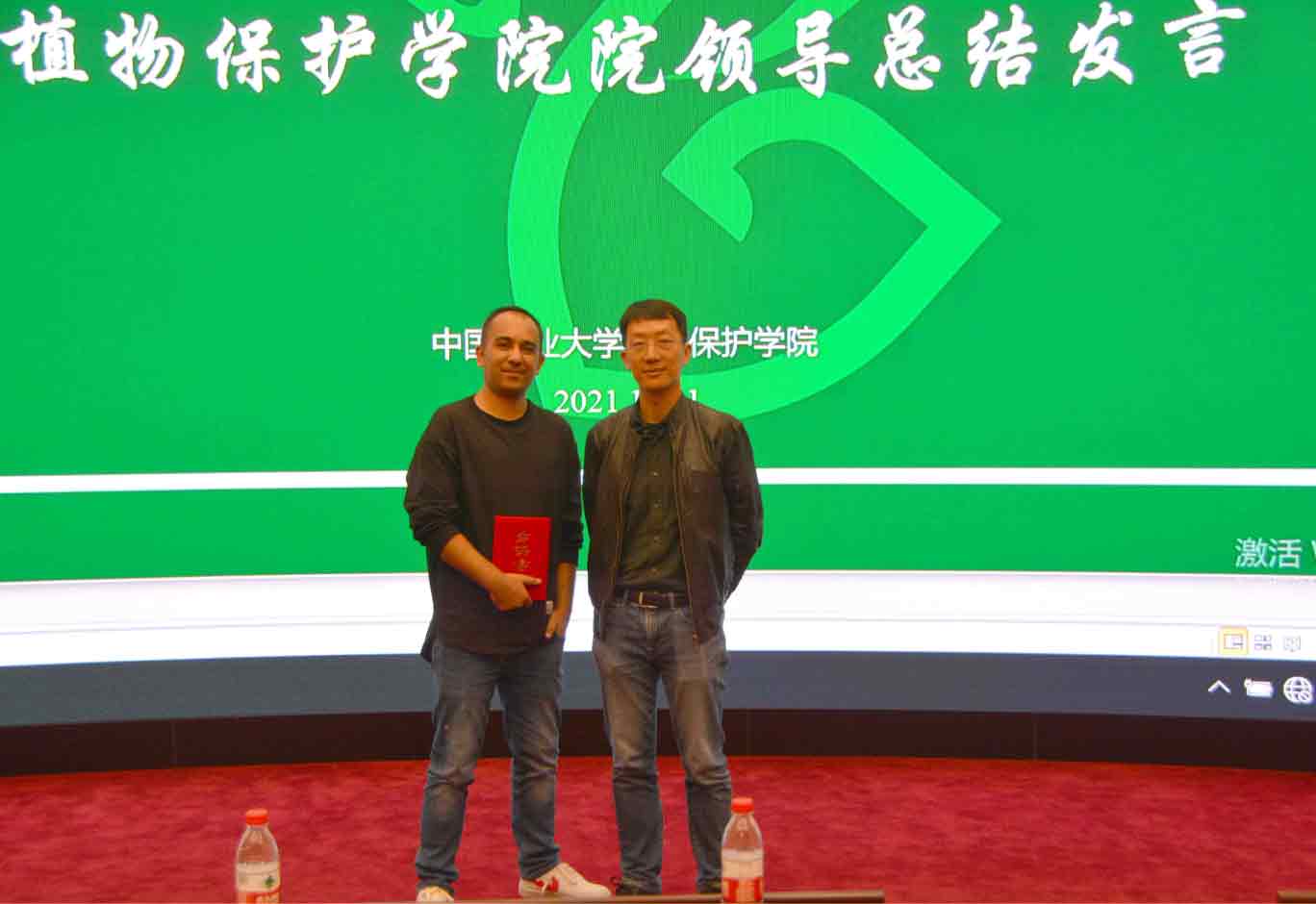 With my doctoral supervisor – Prof. Dr. Xingue Liu at CAU.

Do you have an interesting career story? Send it to [email protected]. Read the general guidelines here.

PrevPreviousThe Scientific Soldier: How I Learned to Actually Love Science
NextGET TO KNOW YOUR PERSONALITY FROM SLEEPING POSTURENext